Would You Want to Live Forever? 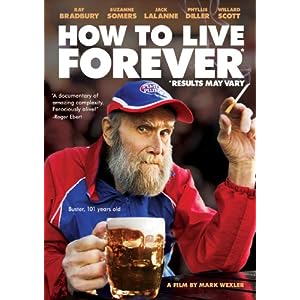 It’s just not the subject of science-fiction movies, but also a topic that Mark Wexler explores in his new documentary “How to Live Forever (Results May Vary)”. For three years of his life, he travels around asking people mostly 80 and above “If you could live another five hundred years, would you want to?” While the title may seem a tad quirky, his reporting is not. He tracks down the world’s oldest people such as the chain-smoking, marathon-running centuguarian named Buster along with commentary from such notable characters as  Jack LaLanne, Ray Bradbury, Ray Kurzweil, Pico Iyer and Phyllis Diller. Wexler presents a riveting collection of stories and insights that challenge our notions of youth and aging with comic poignancy.

Admittedly, I found the cryonic tanks, a type of subzero casket in which people can purchase space in the hopes of being revitalized as science and technology advance, to be rather eery.

Most of the people-on-the-street interviews revealed a majority desire to live life to the fullest without filling our personal bank account of time over the top by five hundred more years.

“Life is more precious that way,” was the sentiment among many of those who were interviewed.

Indeed, our time is precious. But how can we live out that time in the best way we can? It seems several similar characteristics of those who lived 100+ years emerged:

I was inspired by Wexler’s work. You can get a copy here. Would you want to live another 500 years?