Going with the wind

Olivia de Havilland passed away today. In Paris. At the age of 104. Her most notable role was playing Melanie Hamilton Wiles in the 1939 classic Gone with the Wind as the good girl who befriends the wily Scarlett O’Hara and, in the end, dies after suffering a miscarriage. The two-time Oscar winning actress was once quoted as saying, “Playing bad girls is a bore. I have always had more luck with good-girl roles because they require more from an actress.”

Speaking from experience, I can safely say playing the good girl is an exhausting task indeed. 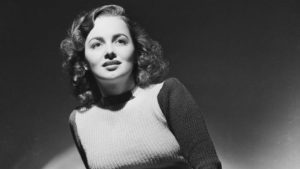 With all the swirl and convolution of the contemporary conversation of who is on the right or wrong side of history, I must agree that no positive advancement has ever happened when we keep our mouths shut.

Being a good girl is something we females learn is rewarded. In real life. Be quiet. Be pretty. Be agreeable. Be nice. But what no one ever tells us is it is okay to be the change you want to see in the world. Because that has been reserved for the men in history. Not the women. If you think about it, very few women have ever been praised by speaking up, speaking out, speaking loudly about the injustices of the world. And in my observation the world’s rules have been decided by men, primarily white men, who determine whether they wish to play by them or not. As rule makers, they are often vindicated or exonerated when they choose not to play by the rules they made.

My game. My rules. My choice. Alright then. Let’s see about that.

Alexandria Ocasia-Cortez spoke out on the floor of Congress this week to discuss the impact of demeaning women. Representative Ted Yoho from Florida called her a “fucking bitch” in the presence of the media. And she could not let that sit. Not because it offended her personally, but because she knows we experience this kind of demeaning behavior every day. She eloquently stated that to have daughters and a wife does not make you immune to your own language. It certainly does not make you a decent man. In fact, in his half-assed attempt at apologizing thereafter, he made the classic move of apologizing for HER misunderstanding his words. Fucking bitch? I never said that. Oh. Yes. You. Did. And yet he felt, in his male white privilege, immune from actually seeing that he gave permission for other men to say the same thing to any woman they meet: including his daughter and wife. AOC pointed it out. And shade-slammed Yoho against the wall.

So yes, Olivia, playing the good girl is infinitely more difficult. We’d rather take the easy way out and play the role of bad girl, dismantling the infrastructure of power that has made this world so very sick. Thank you for your service in showing us compassion. We’ll keep that in mind as we show it to ourselves. Perhaps for the first time in our lives.